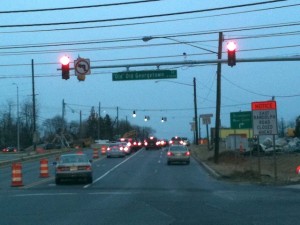 If you ever want to have a conversation with my daughter, it would be helpful to know the following words:

app·a·cha
noun
applesauce.
ORIGIN sounds like applesauce
choo choo
noun
train.
ORIGIN from the sound that trains make
hot dog
noun
Mickey Mouse.
ORIGIN from the “Hot Dog Dance” at the end of every “Mickey Mouse Clubhouse” episode.
nom·nom
noun
food she likes.
ORIGIN I think she got this one from the Internet
for·cha
noun
sweater or sweatshirt.
ORIGIN I have no idea

The few who've managed to touch the iPad so far seem pretty much sold on it.  Fox News' Clayton Morris, for one, can't wait to get his hands on it.  But I'm not sold yet.  Maybe I will be once they appear in stores and I can try one out for myself.  But until then, I have a few specific problems with it that lean me on the "not buying" side of the fence.
1) No camera, ergo, no video chat.  How *great* would this have been as a Star Trek-style communications pad?  Unfortunately, this is a hardware limitation and would require a whole new revision of the product in order to solve.  I do believe the iPad will eventually have a camera, and I think there's a bit of disappointment amongst all the Apple fanboys and fangirls that it doesn't have one now. (Still don't get the purpose of a microphone with no camera in this day and age. Strikes me as really strange.)
2) Perhaps there will be a third-party solution to the camera thing, but that brings up a separate point.  What is still not known is Apple's degree of allowance regarding hardware expansion devices.  They, themselves, have come up with several add-on devices that connect through the dock port: a card reader, a USB-adapter (again, for connecting a camera), and a mechanical keyboard.  But their control over the dock port has been extremely tight on the iPhone and iPod Touch to this point, so I'm not optimistic that they'll be any more open on the iPad. Hopeful, but not optimistic.
2) No multitasking.  Frankly, multitasking on the iPhone/iPod Touch doesn't make a whole lot of sense.  There's just not the screen real estate to run applications side-by-side, so you can really only do one thing at a time anyway.  True, there's the whole issue of background notifications that was a thorn in the side of IM client writers, among others, for a long time, but Apple essentially addressed that using push notifications.  And yes, I would really, really like to listen to Pandora while web surfing on the iPhone and I can't do that now.  Those things can (and should!) be fixed.
But the iPad is a different story.  How great would it be to have on one half of the screen some sort of ESPN or NFL app listing all the scores and stats, in real time, of games in progress, and in the other half of the screen your Twitter client of choice where you can carry on a conversation lamenting how your team can't get it done in the red zone? (Forgive me, I'm a Redskins fan.) On the sleek form-factor of an iPad, without bulky keyboards to take up space, well *that* would rock.
And *that* could be solved in software.  The next round of Apple rumors is likely to involve iPhone OS 4.0, and whether multitasking will be unveiled.
So I'm in "wait and see" mode. I still love the idea, I'd just like to see some of these issues addressed before I send in my preorder.

Update: oh, I was pretty close on the “official Apple case that could be used as a stand” thing too, wasn’t I?

Well, let’s see how I did with my predictions:

So overall, I don’t think I was any better or worse than anyone else as far as predictions go. The price point I was sorta right on, saying that the low model would go for $499, but I figured that would be for a 32GB model. Instead, that’s what Apple’s charging for their 16GB model. I think most people were calling it a lot higher than that. But yes, I did say the 64GB model would go for $699 which is what it is (minus 3G), but to be fair I had thought that the 64GB model would be OLED (which it’s not).

Overall, I’m giving myself a C. Your thoughts?

The moment when Martha Coakley compared Curt Schilling, the hero of the 2004 Boston Red Sox World Series win, to a Yankees fan was the moment she lost the election.  It couldn't have been any plainer had she spat out, Mr. Burns style, a piece of Blinky, the three eyed fish.
Hopefully, that one moment in time hasn't doomed efforts to reform healthcare, but it may have.

Update: See how I did with my predictions.
—

Okay, this is all guesswork, and certainly not breaking any new ground. But I’m just going against the rails on some of the predictions I’ve seen out there (removable battery, “Minority Report” style full motion interface).  I *definitely* think OLED will play some role in this device, but that technology is still much more expensive than the traditional LED that we’re all more familiar with.  Given Apple’s history, they tend to lump in other goodies with their more expensive upgrades as a way of making it seem like more of a value.

We’ll find out next week!

So now Leno is portraying himself as the victim in this whole mess? http://bit.ly/8syf4k  Really?  I’m sorry, but his whining and complaining has gotten him everything he’s ever wanted.  He’s a three-year-old, and NBC are the over-indulgent parents who’ll bend and break to his every whim.  Even listening to his “explanation” of everything on his show last night is disgusting, because he makes it like all the decisions were being made between HIM and the network execs, without ANY INPUT FROM CONAN WHATSOVER. WTF???

The only way for NBC to make this right is to cancel Leno’s lame 10 P.M. show, fire him, and keep Conan on “Tonight.”  But that’s apparently not going to happen.

I’d boycott NBC for all of this, but I don’t watch any of their shows to begin with.

(On the flip side, I’m not sure 11:35 is big enough for both Conan and Dave, as their styles tend to attract a similar demographic.  But with Leno frelling up the ratings leading into it, it’s impossible to know for sure.)

I just wish I could stay up late enough to watch any of these shows without being completely dead the next day.

Posted via web from taupecat’s posterous

Sasha donned the Santa hat and started doing laps around our kitchen island. Only she knows why. But it was darned cute.